By Morgan Beard Somon. Chief of Administration for Urasenke Philadelphia Association, and one of the sensei within the Association.

The Michigan branch of the international Urasenke Tankokai Federation opened their hearts to practitioners from across North America to celebrate their tenth anniversary on May 6 and 7, 2017.

The event began on Saturday morning with koicha and usucha seatings hosted by the association. Our hosts worked hard to transform the hotel setting into a tea space, bringing live plants, lanterns, and tsukubai stones to create a tea garden in the vicinity of each tea space. The utensil selection was a tribute to Urasenke’s presence in this country, featuring many items from Hounsai Daisosho and Zabosai Oiemoto.

In the afternoon, the floor was turned over to regional associations from throughout the continent. Two groups came from Illinois, one representing the Chicago Association and the other a student group from University of Illinois at Urbana-Champaign. The Northeast, the Pacific Northwest, Los Angeles, and the Urasenke Midorikai Alumni Association were represented with four other groups. The Chicago Association offered tea with a ryurei set created by their President Dean Raffaelli. The other groups assembled tray-style ryakubon tea, sharing this simple tea preparation with a small group of guests-no more than ten for each seating. Guests were encouraged to circulate among the six groups and to enjoy tea.

I was fortunate to be able to participate in the afternoon tea as both host and guest. As a host with the Urasenke Midorikai Alumni Association, I experienced the joy of offering tea for old friends and new, sharing stories and memories about the utensils that were used, including many pieces that had appeared at previous anniversary celebrations in other cities. As a guest, I experienced the local flavors and colors of many regions, and enjoyed the many different ways that others have adapted local materials, objects, and imagery into their tea practice. One of the highlights for me was the Urbana-Champaign student gathering, where we witnessed budding tea people apply their whole hearts to the creation of tea.

The next day, we were all treated to two special events. First, Machida Soho, a gyotei sensei from Urasenke Konnichian, conducted a morning workshop in which four temae were taught, in addition to a discussion of warigeiko. No matter how many years you’ve studied tea, there’s always some new revelation to be gained from listening to a gyotei sensei, and we were particularly fortunate to be able to learn from Machida sensei. Christy Bartlett, director of the Urasenke Foundation San Francisco, translated for the English speakers among the participants.

The event wrapped up with a lecture from Dr. Hideji Sekine on the influence of Chinese philosophy on chado. This is a huge topic, and the audience came away with a new way to think about the relationship of tea utensils to each other and how the tearoom becomes a representation of the universe in miniature.

I know I speak for all participants when I express my profound gratitude to all the members of Chado Urasenke Tankokai Michigan Association for their hard work and wonderful welcome to make this a one-of-a-kind event. 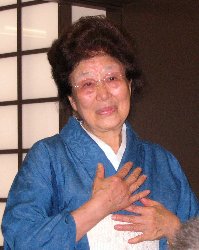 Dear Members of the Midorikai Alumni Association and Midorikai students,

First of all, I would like to extend my sincere thanks to all of you who worked so hard planning and implementing the memorable Midorikai 40th Anniversary Commemorative Events and Reunion in Hawaii this summer. Also, I would like to say thank you to all who gathered in Hawaii, and all of those who–although unable to attend the events personally–sent congratulatory letters to Hounsai Daisosho.

Forty years adds up to many months and years; but for me, it has been a continuum of months and years extending up to the present. The faces of the Midorikai students have remained in my heart and have helped me recall the months and years clearly as if they were yesterday. At the commemorative events, I was able to see again former students who have become prominent and talented people working in their various fields and communities. This made me realize that everyone had gone on to live his or her own life, and that during these forty years, a generation had passed. I was very happy to see that everyone, including people who had been out of touch with Urasenke and perhaps the Way of Tea, had led full and happy lives.

Hounsai Daisosho was very happy that many people were able to gather in Hawaii, and during the commemorative banquet, he said that the Midorikai students are his treasures. What a wonderful thing to say! I have seen many Midorikai students go on to become knowledgeable Chado teachers themselves, and have seen them verily conveying the spirit of Chado and passing the reigns to the next generation. This is for me an unparalleled joy.

I hope that reunions, such as this one commemorating the 40th anniversary, will continue to be held in ten, twenty, thirty years, and further into the future. Let us strive to share Daisosho’s continuing feelings for Midorikai and its success, and to contribute to his great endeavors to expand Japan’s traditional Tea culture into a world-wide cultural activity. Through these activities, we are all playing an important role in the long history of Chanoyu.

Again, I would like to express my great appreciation for your invitation to the 40th Anniversary Commemorative Events. Please stay healthy and full of energy; I, too, will be mindful of my body and strive to live a long life devoted to tea, with the hopes of being able to meet you all again in the future.

It is a great honor and a privilege to be here with you in the presence of the Great Grand Master Hounsai to celebrate the 40th Anniversary of Midori-Kai. It is truly a realization of my dream. When I see the Great Grand Master and all of the 60 alumni of Midorikai, whose faces have been imprinted deeply in my heart, I feel as though I am attending a family re-union.

I sincerely hope and believe that the newly established Alumni Association would flourish and prosper, further deepening your bonds, so that your activities will continue 10, 20, 30 years into the future, and into to eternity along with the Urasenke Family.

It was 40 years ago, in 1970, the year of the Osaka Expo, when a group of youths came to Kyoto and knocked on the doors of the Urasenke School of Tea. That marked the first encounter between the Great Grand Master Hounsai and your predecessors. They had come from the United States, Canada, Ethiopia, Sweden, and Denmark. That day also marked the beginning of the Midorikai.

Hounsai, who at the time was the Grand Master of Urasenke had donated a tea room named, “Han’an, Banri” for the Japanese garden exhibit at the Osaka Expo. This was where these youths had their first taste of tea. Through this experience, they discovered that despite the noise of Osaka Expo, “something in the Japanese Chado, offered a healing of the heart.” Their impressions resonated with the Grand Master’s belief that Chado could heal the hearts of the people of the world after all the sufferings experienced in the World War II.

The Grand Master established the Midorikai, “The Chado Scholarship System for the Students from Other Nations.” The Mission of the Scholarship was to “teach and develop the youths from other nations through the study of Chado according to the Urasenke School of Tea, receiving hands-on experience and understanding of the true meaning of Chado, so that they could use that knowledge and experience to contribute to the world peace.”

At the same time, the Grand Master established the motto of “ichiwan kara peacefulness” for the domestic Tankokai. Thus, began the movement of the “Peacefulness from a Bowl of Tea.” Grand Master’s belief has not changed from that time, so that now 40 years since, and as the Great Grand Master, Hounsai is still with us today to celebrate this occasion. It is truly a wonderful day.

Whenever, I see the Great Grand Master’s face, I am reminded of the saying, “banri ichijo no tetsu” Steel Wire Continues for Thousands of Miles. The literal meaning seems to describe the underwater communication cables that link the continents. Of course, that is not what I am referring to. The Zen interpretation of the expression is to pursue one’s belief without disruption or extraneous thoughts to the very end. However, it does not mean, to be inflexible or rigid. Just as there is elasticity in steel, there must be the ability to flexibly respond to the changes from the external environment. This metaphor of one steel wire which continues on without any doubts describing the Zen training has truly been exemplified before our eyes by the Great Grand Master Hounsai.

The members of Midorikai can be likened to the doves that have flown in from all over the world to alight upon this wire represented by the Great Grand Master to find their spiritual solace through the Japanese tradition of Tea.

Since the establishment of Chado in the 16th Century by Rikyu, in 400 years of its history, it took the 15th Generation Grand Master living in the 20th Century, to open the doors of this traditional Japanese culture to the rest of the world. Since then, over 500 Midorikai doves have alighted on this wire. Besides the members of Midorikai, many heads of states, foreign dignitaries, scholars, students and visitors have gathered from the 5 Continents.

I believe that it is a miracle, living in the age of transition from the 20th to the 21st Century, where we have experienced drastic turmoil in the world affairs, that we have encountered Chado and the Great Grand Master Hounsai.

Two years ago, I published a book entitled “sekai de ocha o” from Tankosha describing the half a century of history of the globalization of Chado. In the book, I attempted to describe the story of the great achievements of the Great Grand Master Hounsai in his relentless efforts to spread Chado to the world, which I earlier expressed as “banri ichijo no tetsu”. From the period of the 20th to the 21st Century, Chado became established as not only a Japanese cultural heritage but a world cultural heritage through the efforts of the Great Grand Master Hounsai. Midorikai has played a crucial role in that history. In the book, I wrote about his mother, Kayoko Ookusama, his wife, Tomiko Okusama and the individual members of Midorikai who were there to support him during that time. They all left strong impressions of their sincerity to Tea and to the Grand Tea Master that I felt that I needed to leave a record of their existence. We, including myself, have been fortunate to be part of this miraculous story.

“Tea is enough if it satisfies thirst.” This implies not only the satisfaction of the physical thirst but also the spiritual thirst. All of you as members of the Midorikai know empirically through your practice and training of Tea, that it does truly satisfy the spiritual thirst. With this in mind, I hope you re-confirm the spirit of the “Peacefulness from a Bowl of Tea” as we celebrate the 40th anniversary of the Midorikai.

In closing I wish to extend my congratulations to the Great Grand Master Hounsai, the alumni and the members of Midorikai on this joyous occasion.

Thank you very much.